11 May 2015 Huffington Post. Election Response – What’s Next for Digital Democracy? by Matt Chocqueel-Mangan. “Digital democracy organisations need to work together if we are to attract the level of funding – and support from the mainstream press – required to reach more people across the UK. This is something that is starting to happen already, and something I intend to be actively involved in. We have a lot to be positive about, so the more we shout together, the louder our voice will be.” 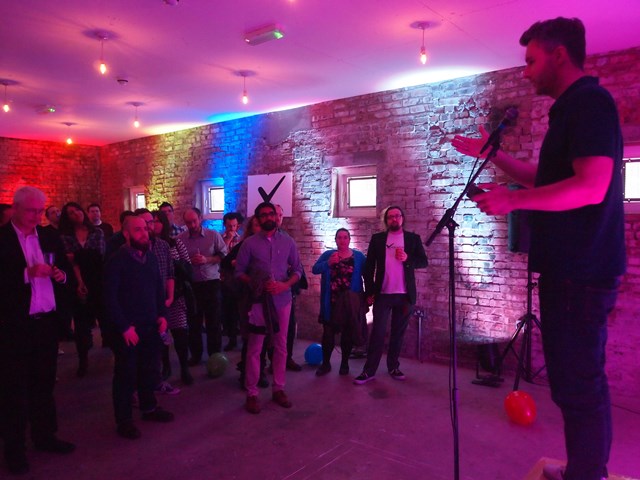 6 May 2015 YoungThoughts. Let’s prove people wrong about our generation by Alicia Caley. “We need to find out what the parties are offering to us, place our votes based on the policies of the parties (not on the way their leaders eat a sandwich), and contribute to the government who is endowed with the task of making our lives better for the next five years. I turned to Vote for Policies, a voter advice tool, for more information on what the parties stand for.”

6 May 2015 The Lincolnite. Labour’s lead narrows in Lincoln’s Vote for Policies survey by Stefan Pidluznyj. “The comments we have received have suggested that lots of people were surprised by their results, and felt confident enough to change their vote, or they decided to vote for the first time ever.”

5 May 2015 Virgin: Richard. Vote for policies by Richard Branson. “[Vote for Policies] provides an opportunity to make a more informed decision about who to vote for at the 2015 general election. I would wholeheartedly recommend spending a little time going through it.” 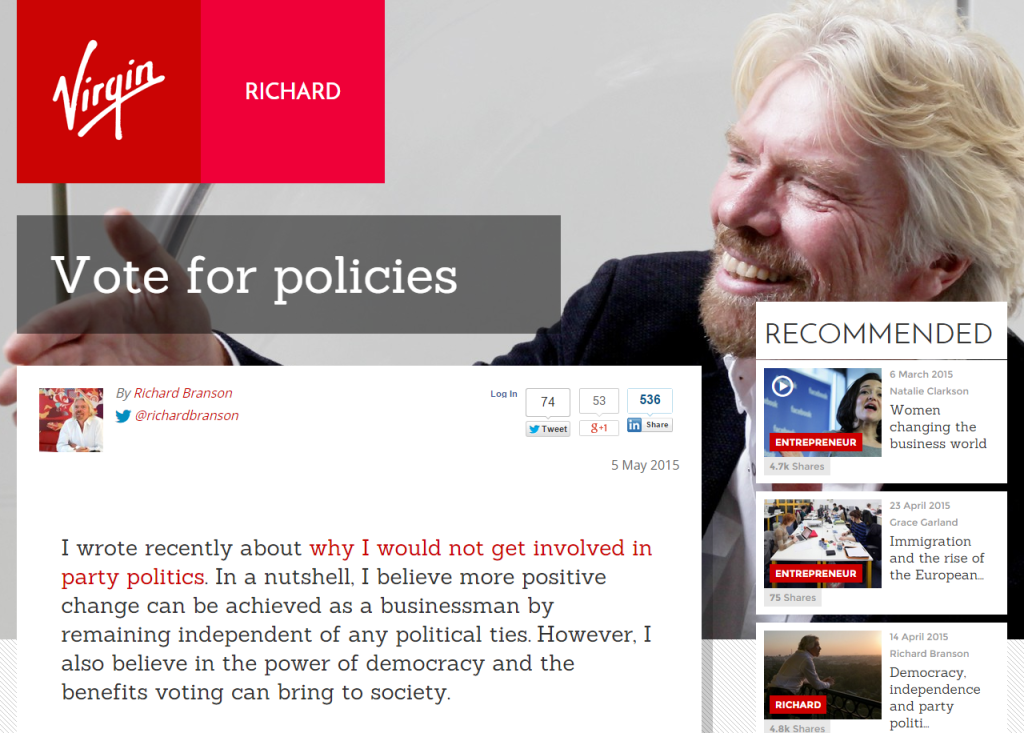 5 May 2015 The Conversation. Which online tools can really help you decide how to vote? by Benjamin Worthy.

5 May 2015 Caroline Lucas recommends Vote for Policies on her Facebook page. 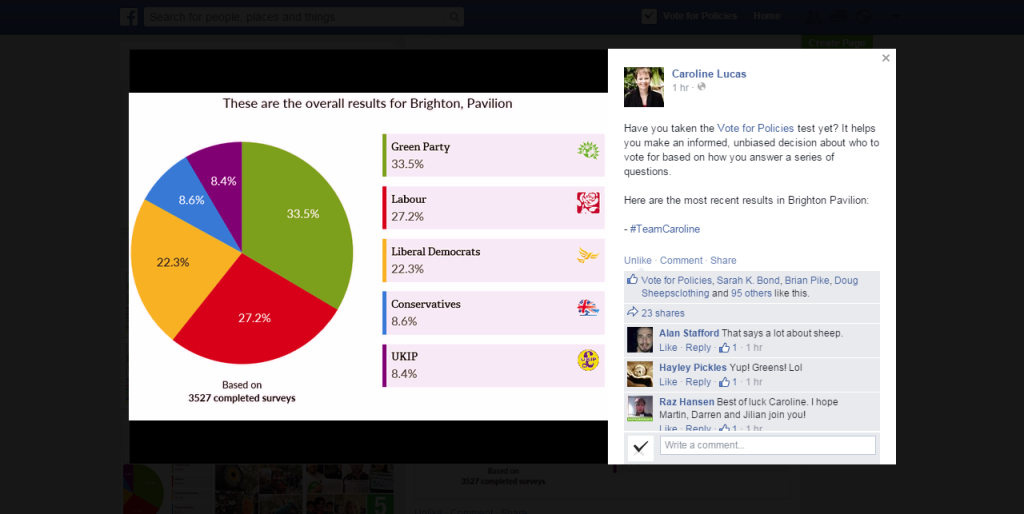 3 May 2015 The Observer.  Four of the best: election campaign mashups by Kathryn Bromwich.

1 May 2015 New Internationalist. Putting an end to personality politics by Matt Chocqueel-Mangan. “Make politics about policies and not personalities, and we might just get the government – and the democracy – we deserve.”

1 May 2015 Blue & Green Tomorrow Guide to Sustainable Democracy 2nd Edition. Policies and the Path To A Sustainable Democracy by Matt Chocqueel-Mangan. “The task before us is to make sure our government is accountable to the policies that have been pledged. Vote for Policies is going to do this by tracking progress and reporting it back to the public, and creating discussions that engage the electorate more than once every five years. We going to make it clear that policies (and promises) matter.”

29 April 2015 Financial Times. Voters unclear about who has promised what on NHS by Jim Pickard.

How voters don’t have a clue about some of the parties’ biggest election promises http://t.co/Il2kTUti4K @ComResPolls — Jim Pickard (@PickardJE) April 29, 2015

29 April 2015 The News Hub. Vote for Policies: Forget about the faces of the general election by Laura Young. “Vote for Policies is a VAA (voter advice application) formed by a non-profit, voluntary organisation that aims to increase election participation and make policies the focus. It allows us to disregard the spiel of politicians on our TV sets, and ignore the Chinese whispers we hear from those on the street or on social media.”

29 April 2015 The Argus. Are you a closet lefty or secret right-winger? Vote for Policies website throws up surprises by Ben Leo. Matt Chocqueel-Mangan said: “Really the site is about connecting party policies with our individual views. Our goal is to allow everyone to make an informed choice about who to vote for – and not just voting for one party because of tradition or for tactical reasons. There’s no agenda, it’s not politically motivated – it simply allows people to see which parties are representing their views.”

Are you a closet lefty or a secret right-winger? Vote for Policies website throws up surprises: As the election… http://t.co/6qh5EZ5ICz — Brighton and Hove (@brightonhovenow) April 29, 2015

29 April 2015 BBC Radio Sussex. Neil Pringle on BBC Breakfast. Listen back to hear founder, Matt Chocqueel-Mangan, discussing their top story on undecided voters. He talks about the importance of policies and how Vote for Policies can help us make an informed choice in the ballot box on May 7th. Starts just before 02:10:00.

#UKIPs stance on both #NHS and #Education most popular among British voters according to the Vote for Policies poll. pic.twitter.com/VRdm7elmBE — Richard Hilton (@RichardHilton1) April 29, 2015

28 April 2015 Huffington Post. Policies Matter – But the Results May Surprise You  by Matt Chocqueel-Mangan. New data released from a national poll designed by Vote for Policies and conducted by TNS shows UKIP’s policies on Health and the Liberal Democrat’s policies for Education are preferred by a representative sample across Great Britain.

23 April 2015 Gloucestershire Echo. General Election 2015: Cheltenham voters get surprising results in party policy poll. Matt Chocqueel-Mangan said: “Vote for Policies is about connecting the parties’ policies with our individual views. “The results can often be surprising, but I want everyone in the Cheltenham area to be able to make an informed choice about who to vote for.”

22 April 2015 BBC Radio London 94.9FM. The Breakfast Show with Penny Smith and Paul Ross. Founder of Vote for Policies, Matt Chocqueel-Mangan, talks about how digital tools like Vote for Policies can help voters to become more informed. Starts from 01:47:00.

20 April 2015 The Spectator. Why are all the manifestos so rubbish? by Isabel Hardman. “…independent websites like Vote for Policies that help curious voters work out who they should support based on the policies they like.”

19 April 2015 The Guardian. Apathy or antipathy? Why so few young people vote by Helen Lewis. She mentions Vote for Policies as part of a “burgeoning trend [of websites]…aimed at countering three of the big reasons young people give for their disconnection from politics: lack of knowledge, the perception that all parties are the same, and the concern that no single party matches an individual’s specific list of concerns.”

17 April 2015 The Mancunion. Vote for policies, not personalities by Joe Evans. “The election is presented to us in such a way that what we are voting for isn’t really displayed. With this in mind it’s up to us to dig deeper. It is our responsibility to ensure we vote for policies and not for personalities.”

16 April 2015 Miss Vogue UK. Miss Vogue’s 3-Step Election Guide by Katie Berrington. “The best bit? It’s all anonymous so you don’t know whether you’re a secret Labour supporter, a closet Conservative or a surreptitious Green subscriber until the end. No personality politics here!”

16 April 2015 Here is the City. Not sure who to vote for? Here’s some websites that might help by Richard Wood. “The ‘Vote for Policies, not personalities’ website offers an alternative way of looking at policies.”

9 April 2015 Guardian. Who should I vote for in #GE2015? Here’s how the internet can help by Carmen Fishwick.  “Vote for policies – I left feeling like I might have actually learned something about politics…Warning: if you are interested in all of Vote for policies’ topics you will lose almost an hour of your life. But then maybe you have an hour of your life to spare for something as important as the general election?”

9 April 2015 The Lincolnite. Lincoln voters take part in independent policies survey by Stefan Pidluznyj. “A new online survey encouraging voters to pay close attention to the policies of each party has revealed some surprising findings in Lincoln.”

Spring 2015 Tech City News, Issue 6. Vote for Tech by Kirsty Styles. “Vote for Policies, which leads people through survey questions based on each party’s manifesto, is probably the most well recognised platform in this space.” pp 62.

31 March 2015 Huffington Post. Who Should I Vote For In General Election 2015: 10 Tools To Help You Decide by Louise Ridley. “We should vote for policies, not people: that’s the premise behind Vote For Policies, a not-for-profit independent organisation which says the results “may surprise you!”

25 March 2015 Blue and Green Tomorrow. Vote for Policies at Birkbeck: can the internet change voting? by Simon Leadbetter. “Vote for Policies gathered inspirational speakers and more than 100 delegates at Birkbeck on the 24th March to discuss whether the internet can change the way we think about politics, specifically the choice between policies and personalities? The views were diverse and the debate excellent.” The discussion continued on Twitter at #VfPdebate.

25 March 2015 Liberal Democrat Voice. The Independent View: Half of the public are likely to change their vote after examining the parties’ policies by Vote for Policies’ founder, Matt Chocqueel-Mangan. “Last night, I found myself in the strange position of introducing a panel of speakers at Birkbeck, including John Curtice and Dr Rosie Campbell, to discuss whether the internet can have an impact on our voting habits. I say strange because just 5 years ago, I had no real interest in politics. I suppose I was like most people, engaged a little around election time but otherwise never really bothered by what went on in Westminster.”

Very intriguing – do this test & see which party you should REALLY be voting for in the election: https://t.co/ZvimHtrZrY — Caitlin Moran (@caitlinmoran) March 20, 2015

12 March 2015 Blue and Green Tomorrow. General election: Public debate to explore how the internet affects voting by Charlotte Malone. “The debate [on the 24th March] is being organised by Vote for Policies, in partnership with the Birkbeck Institute for Social Research.” Register for your free ticket here.

12 March 2015 Vote for Policies is mentioned on BBC Question Time, by Natalie Bennett on air and the Question Time team on Twitter:

Here’s the vote for policies website, if you want to try it yourself: http://t.co/HMwjFvNLgq#bbcqt — BBC Question Time (@bbcquestiontime) March 12, 2015

11 March 2015 Huffington Post. How voting for policies can increase political engagement by Vote for Policies’ founder, Matt Chocqueel-Mangan. “…I decided to find out for myself. I got onto their websites and found each party’s manifesto. I went through them all in detail. For the first time in my life, I felt in a position to make an informed choice about how to vote, based on knowledge of all the policies being proposed by each party. It was a revelation – and one I wanted to share.”

11 March 2015 Tech City Insider. UVD makes Vote for Policies count, by Kirsten Minshall.  “At the heart of the Vote for Policies project is the need to reach as many people as possible. So the service was designed and built from a mobile-first perspective, ensuring an optimal experience no matter what device or screen size is being used. We also paid significant attention to accessibility.”

11 March 2015 Vote for Policies’ #policychallenge campaign is in full swing and we hit the 100,000 completed surveys milestone.

20 February 2015 Blue and Green Tomorrow. Vote for Policies launches ahead of General Election by Charlotte Malone.  “In the six weeks running up to the 2010 election, over 280,000 people used the Vote for Policies website. This year, following a crowdfunding campaign, the organisation has set an ambitious target of reaching five million voters.”

19 February 2015 www.hereisthecity.com. New Vote for Policies, not Personalities’ website launched by Richard Wood. “On one hand, it boils the election down to a battle of ideas and how to combat the problems in society – an intriguing prospect. But on the other, it neglects leadership abilities and abilities of MPs and local candidates. The website is a good step in the right direction in helping people who are not necessarily engaged in politics decide who they should vote for, but other factors should be considered too.”

18 February 2015 London Evening Standard. Dirty politics trivialise a vital general election by Richard Godwin. “There are huge ideas in the ether. There are smart online initiatives, such as Vote for Policies 2015, launched tomorrow, which attempt to increase engagement in actual issues.”